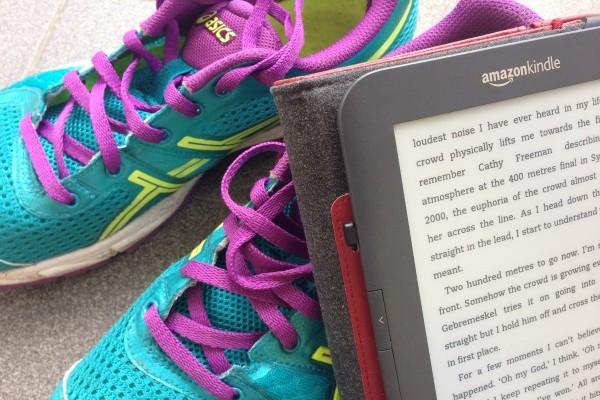 Running with the Kenyans, Adharanand Finn

An entertaining, funny and inspiring insight into the “run, eat, sleep, run” lifestyle of the dedicated, aspiring and top athletes in Kenya by Adharanand Finn, a freelance writer and runner who takes his family out to Kenya to try to discover the secret of the best distance runners in the world. He is searching for the key to their success, but discovers that it is not quite as simple as an elixir, special gene or training secret.

“When I made my plan, I envisaged running hard across the plains in the midst of group of Kenyans, the punding of our feet shaking the dry earth. But seriously, who am I kidding?

“How fast is the slowest athlete in Kenya?” I ask, looking for a crumb of hope.  Maybe I am an athlete. I won the Powderham Castle 10k race. My time was 38 minutes and 35 seconds. “For the 10k, for example, what would be the slowest time?”

They both look at each other. This is obviously a tricky question. “Are we including juniors?” Richard asks me. That’s eighteen- and nineteen-year olds.I nod. I could train with juniors, why not? Perhaps that’s the solution. “And girls?” I nod again. The more the merrier. “About 35 minutes,” he says."

“We’ve met a few times. I was talking to you at the track yesterday.”

“Is that Wilson Kipsang?”

“Oh I thought your name was Wilson. The 2:04 marathoner, right?”

Even if you dial a wrong number here you can end up speaking to a person who has run a time three minutes quicker than the British record, set over twenty-five years ago."

Chris McDougall, plagued by running injuries, travels to Mexico's Copper Canyons to investigate the secrets of the Tarahumara Indians, who run hundreds of miles, sometimes days on end, without suffering the injuries that seem to plague western runners.  The book that helped to inspire thousands of barefoot runners, it promotes the joy of running, is full of colourful characters and stories including the famous “Caballo Blanco”, and is bound to make you want to strap your shoes on (or not!) and head out for a long run, wherever you stand on the shoe debate.

“When it comes to marathoning, the Tarahumara prefer more of a Mardi Gras approach. In terms of diet, lifestyle, and belly fire, they’re a track coach’s nightmare. They drink like New Year’s Eve is a weekly event, tossing back enough corn beer in a year to spend every third day of their adult lives either buzzed or recovering. The Tarahumara don’t replenish their bodies with electrolyte-rich sports drinks. They don’t rebuild between workouts with protein bars; in fact, they barely eat any protein at all, living on little more than ground corn spiced up by their favorite delicacy, barbecued mouse. Come race day, the Tarahumara don’t train or taper. They don’t stretch or warm up. They just stroll to the starting line, laughing and bantering…then  go like hell for the next forty-eight hours."

Ultramarathon Man: Confessions of an All Night Runner, Dean Karnazes

An endurance athlete who has undertaken and won some of the most challenging endurance events on the planet, Dean Karnazes is also famous for being the man who ate a whole cheesecake and takeaway pizza whilst out on an overnight run of more than 150 miles and for running for 48 hours on a treadmill on US television. Dean rediscovered his love and talent for running by chance after a drunken night out on his thirtieth birthday when he decided to go out for a run and didn’t stop for seven hours…he’s not your typical runner.

“I found a pay phone and placed a collect call to home, waking Julie.

“It’s a long story. The short versioni s that I’m out in front of a 7-Eleven.”

“Half Moon Bay?! How did you get down there?”

“From the house. I got here about five minutes ago.”

“I think so. I’ve lost control of my leg muscles, and my feet are swollen stuck in my shoes. I’m standing here in my underwear. But other than that I’m doing pretty well. Actually I feel strangely alive.”

In the summer of 2013 Mo Farah achieved the “double double”, repeating his 5000m and 10,000m Olympic wins at the world championships in Moscow. This was followed by a disappointing result in his 2014 marathon debut, and then a successful return to the track.  Of Somalian origin, Mo was forced to leave his twin brother behind when he came to the UK aged just eight years old. A touching, inspiring story about a man growing up in difficult circumstances who went on to become one of the best distance runners Britain has ever seen.

“Two hundred metres to go now. I’m still out in front. Somehow the crowd is growing even louder. Gebremeskel tries it on going into the home straight but I hold him off and cross the finish line in first place.

For a few minutes I can’t believe what has happened. “Oh my God,” I think. “Oh my God, I’ve done it.” I keep repeating it to myself, over and over: “I’ve done it. I’ve won.” All around me the crowd is going wild. Suddenly it hits me: I am a double Olympic champion. I have gone where no British distance runner has gone before.

I sink to my knees. The roar of the crowd booming in my ears. Getting here has taken a lot of hard work and sacrifices. I’ve had to come a long, long way and go through so many highs and lows. Looking back, it’s been an amazing journey.”

Kilian Jornet has competed in and won some of the world’s most challenging endurance events from the Ultra-Trail du Mont Blanc to the Western States Endurance Run. He holds the record time for running up and down Mount Kilimanjaro and last year took 20 minutes off of the record for running up and down the Matterhorn (Cervino).  In his autobiography, Run or Die he talks about why he runs, how he feels during these extraordinary events, and what motivates him to keep on running.  The vivid descriptions of the trails and mountain vistas make you feel as though you’re running alongside him.

“But what does it mean to win? What is the real victory? When I cross the finish line, what is it that makes my hair stand on end or makes me feel that my feet are afloat, makes it so that I can’t surpress the need to cry, makes me want both to run on and collapse on the ground?  The real victory isn’t the act of smashing through the tape and crossing the finish line, it’s not seeing your name first on the list or standing on the highest step on the podium.  This is not what makes your legs shake with fear and excitement. Victory, the real victory, is what is deep down inside each one of us.  It’s what we can’t believe will ever happen despite all the training and will on our part, and yet it is what finally happens. Despite all the thinking and brandishing of calculators, after so many hours of preparation, after so many days of training, of telling ourselves that we can win – or simply finish the race – it i sas if something in our unconscious is constantly telling us that it is impossible, that it would be too wonderful, too brilliant, too incredible for it to become reality. That what we want to achieve is only a dream.  And when you cross the line, when you look behind and see that it is real, that you are flesh and blood, and that what seemed possible only in dreams has become real, you realise that is the true victory.”

If you enjoyed this, read some of our other blog posts here.