The desert that steals your soul… 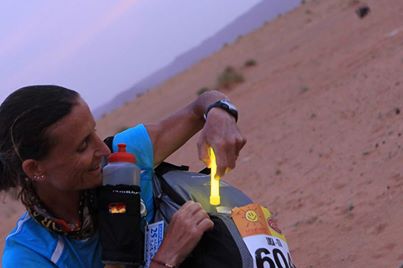 Luisa Balsamo, ultra champion and Running4you athlete writes about her experience at this year’s TransOmania race across the Kingdom of Oman and the Wahiba Sands Desert. First women to finish and 4th overall, Luisa covered the 300km (186m) across the desert in 74 hours and 18 minutes. Here’s her story…

Those of you who think that a 300km race is devoid of suspence, boring, mundane, or exhausting slow, I have to say that you are mistaken!

The good news is that my “reportage” won’t be 300km long, nor will it last 74 hours!
I’ll try to be as concise as possible, without omiting the experiences that have left an indelible mark upon me.

The one thing that has always been very clear to me, right from the first minute, is that my race preparation would have to be an enormous, immense exercise in mental skills training and that if I was to lose something before the race I would have prefered to lose my physical fitness rather than my mental concentration.
Having said that, with a touch of recklessness and some healthy folly I had embarked on something that was likely much bigger than me and that challenge was: Luisa vs Her Majesty The Infinity and Beyond.
The desert calls, Luisa runs…

Amongst the many good wishes received unexpectedly from all of you, I allow myself to share that of Ottavio because it faithfully reproduces the meaning of what I do and why I do it:

…once, not that long ago, I wrote to a friend: “…I am really happy for you Marco, now also Oman is yours!!” (in reference to ultratrail champion Marco Olmo)…and he, a great, pure soul wandering across the scorched earth replied”…thank you so much…but instead it is I who belongs to it…and I will forever!!” Now, Luisa, that you have completed your umpteenth great challenge…in one of those places that have stolen your heart… you too can say”... my soul..belongs to the Oman desert…”

Wahiba Sands, you really stole my soul right from the first minute. From when I took on the first part of the race, leaving from White Beach going directly towards the peaks up to Wadi Bani Khalid climbing up the rugged mountains beneath a marvellous starry sky. It was there, the first night, that the magic started for me. The image of the waning moon, really bright and red and next to it a spectacular Venus resplendent to an almost exaggerated extent, made me lose my mind to the point that for a minute I thought that my great travel companion, Ginafranco, would think that I was mad! I must have repeated how much I liked that star to him perhaps a hundred times! I will never again see a star in so gleaming and bright that even seemed to appear in 3D. From that moment I thought that following that sight, the race would be easier to complete. And the hallucinations hadn’t even started yet…

Soon after that we had to overcome the “labyrinth” test, an absurd part of the course that, as the word suggests, was almost impossible to decode. In that part of the race we found ourselves in a group of 5 and in turn, we helped each other to find the route that would take us to the entrance of the marvellous natural pools of Wadi Bani Khalid. And it was there that the Chinese guy Chris first materialised, you’ll find out more about him later…At this point we’re at 80km, only 200 more to go!

We reach the canyons, arid, hot, seemingly infinite and also a bit boring and they take me up to the 145km checkpoint and the second night, together with Gianfranco and Roberto. The night of torment, of frustration and discouragement. Between CP6 and CP7 have passed 9 interminable hours, in which we should have covered 21km but instead we did 42…I seriously thought I had lost everything at that point and the tension reached as high as the stars. They had changed the course and the GPS signals were no longer valid and, in short, there were old and new balise signals, so if you didn’t pay maximum attention mistakes were going to be made. In addition, the organisers directions were a little confused. A second’s distraction and you lost your way.

At 08.00 CP7 I drink a coffee, say goodbye to Gianfranco, who stopped to rest, and I finally dive into the Wahiba Sands. Here we are, this is my favourite, long-awaited part of the race, where I will experience intense emotions and it will steal a part of my soul. The “last” 130km of pure sand, I’ve been dreaming about it for days. White, yellow, reddish and even brown, just sand everywhere. I start my long journey towards the finish line along which I’ll be accompanied by snakes, mice, beetles, camels and many other things that are difficult or even dangerous to describe!
The sun is very hot, we’re talking about more than 40 degrees celsius, so I dare to say scorching. I hope to make the time pass as fast as possible until sunset when I can breath a sigh of relief. I will spend the night alone trying to interpret my own emotions and feelings in as best as I can. Up until this point I have been able to vanquish all moments of tiredness and, even if inside I was convinced I could do without it, I decide to stop at CP9 to get some blisters on my feet treated and sleep for one hour. That’s what I do: 20.30-21.30. Awake again, I put my rucksack on my back and off I go again!

From here on the hallucination show begins. Perhaps I shouldn’t talk about it, it might frighten you, but I assure you that for me they were vital! They kept me company and kept me entertained during the whole route up until when the sun once again peered out between the dunes.
Wonderful designs, compact, well-defined, clear and perfect! Faces, animals, men, women, Ancient Egyptians, extra-terrestials, dogs, cats and snakes. All of this with an astonishing precision! But I haven’t finished. Moving sand sculptures. Heaps of sand that came to life and transformed into anything possible! Now I know, you’ll think I am mad! NO! We compared our experiences at the finish and we all had the same visions. I was forgetting something. The game with the shrubs and bushes! How many different things they could become! Even parked cars!

Good, after this we can get back to the race, yes, because in the meantime I didn’t stop running, I followed the course relentlessly up to CP10 at which point the strangest show I’ve ever seen since I started doing these races was waiting for me: the desert and the fog. An incredibly fascinating and at the same time surreal union. The colour of the ochre yellow sand mixed with the fog that made it look like a blurred but very beautiful photo.

CP11: the situation wasn’t yet entirely clear to me. After CP7 I was convinced that I was a long way behind my adversaries and in a kind of superstitious gesture I had never asked my race position at any of the CP’s until CP9 where the French athlete Dufour switched places with me in the tent. Then, to tell the truth, I was convinced of being followed by the Canadian (Second in the Grand to Grand) and by the French winner of the 333 and the Libyan Challenge. Once arrived at CP11 I found the Chinese guy Chris once again, who asked if we could finish together. In the spirit of sport, and convinced that it would be possible, I accept with pleasure but my pleasure became a torture because in reality he wasn’t doing that well and he was hoping to be helped by me, although this for the most part worked out…this continued up to CP12 when, whilst I sipped a tea I was called over by the CP guys who told me to get up straight away and run faster than the wind. My race started there. I set off like a rocket at breakneck speed. Sand came right up to my ankles and whilst I was running I asked myself where I was finding all this energy and all the strength that was enabling me to run in this way after 260km. At 282km, with 3 more to go, the gps went mad, the balise couldn’t be found, and I couldn’t see any lights or reference points. Total dejection. I decide to launch the help call but I don’t get a response. Finally I see a flashing light. I reply with my frontal lamp. The lights of a car that is approaching. Ivan gets out (what a treasure)! I’ve never seen such a beautiful sight! With him by my side we arrive at the Imlil Beach finish line.

I am tired, happy, confused and full of emotions that still fill me today but I'll have to hold them off because unfortunately I have fallen back into the daily routine.

I ran for all of you, for me and for my children but above all for the many answers that I found along the route.