Boston Marathon – One Year On 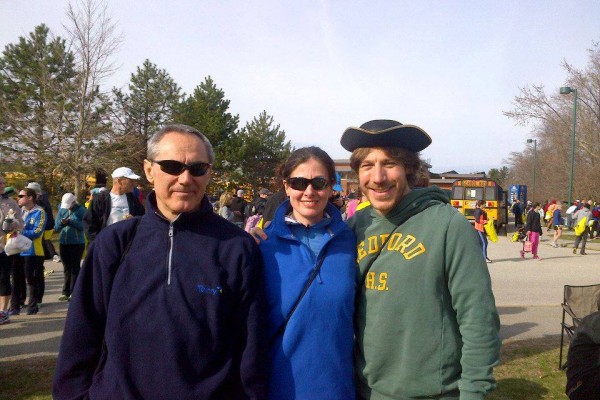 This time last year I was packaging my case for Boston, heading out to run the world’s oldest marathon with two friends. I couldn’t wait – I wasn’t expecting to run a good time as I’d had time off for an injury – but just being at the start line of a race with such a history, a race linked to running legends such as Katherine Switzer and of course the challenge of the famous Heartbreak Hill was enough to put a smile on my face. The photo above was taken at the start line, hours before any of the terrible events that happened later that day. (My friend Alex is wearing a hat in honour of "Patriot's Day).

I wasn’t at the finish line when the bombs went off.  I was safe, back in my hotel room with my friends, and we received the news via text message.  For a few hours we lived the experience just like most people, through news channels and social media, whilst responding to the hundreds of messages from worried friends and family.

It was only later when we left the hotel that evening that you could feel just how much the city had changed.  It was empty - apart from the police, helicopters and stunned runners (many with their medal still around their neck) – some like us out to eat, others, more local, still trying to get home.

Back home two days later my Mum cried with relief (Mums do that), but apart from that, my life went on as before.  I had been one of the lucky ones.  Just being present that day however, made me feel a connection. I have followed news reports about the injured and their progress, touched by the courage, strength and determination I saw in interviews and news reports, aware of how it would be so much more difficult to maintain once the TV cameras had left.

Hundreds of people are still dealing with devasting injuries and will have to deal with them for the rest of their lives. But following the progress of Sydney and Celeste Corcoran, watching Adrianne Haslet-Davis ballroom dancing once again (with the help of a robotic prosthetic) on TED, a photo of the the Stoneham brothers walking parts of the route with their friends and family or a news report showing how Marc Fucarile  and Jen Regan plan to get married soon shows just how tough and resillient people can be when they have to.

On Tuesday, exactly one year on, the city paid their respects to the four people who died and the hundreds injured. On Monday 21st April 2014, thousands of runners will line up at the start to continue the Boston Marathon story.  We’ll be thinking of all of those effected by the terrible events in 2013, feeling inspired and humbled by their strength, determination and resilience.  And maybe the next time that we don’t feel like going out running, we’ll remember just how lucky we are just to have the opportunity - and we’ll grab our training shoes and head straight out the door.