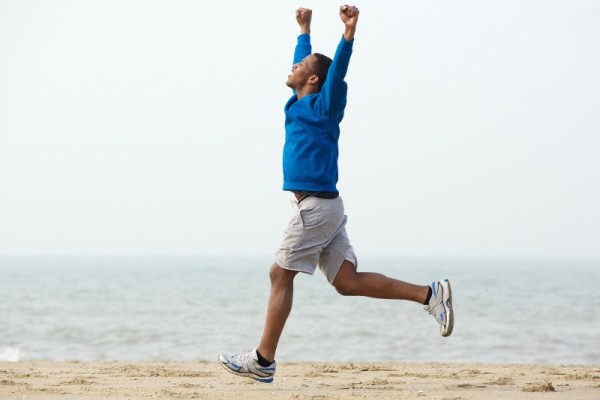 Your arms are almost as important as your legs when you run, but this is often overlooked.  Using your arms in the right way can help you both run faster (up to middle-distance) and consume less energy (long-distance runners).

Why are they so important?

The role of the arms when running is first and foremost to maintain balance.  The natural action, where the right arm moves in sync with the left leg and the left arm moves with the right leg reduces to a minimum the left/right movement and stabilises the torso.  It also helps to maintain the body’s centre of gravity.  (The cerebellum is responsible for the regulation of balance and the co-ordination of muscle movement.  If it sustains an injury, it can result in ataxia (from the Greek ataxiā, disorder), the progressive loss of muscle co-ordination. )

The elbows should remain close (but not stuck to) the body and move backwards and forwards, not across the midline of the body.  There should be an approximately 90° angle at the elbow, that may close a little when the arm moves forward and open as the arm is brought back.  The shoulders should remain low and relaxed. Hands too should be kept relaxed - don’t clench your fists tight, this creates tension in the arms and wastes energy.

Having said this, it should be noted that many athletes, including international level runners, do not run as described in the canon of correct running technique. Despite this, they still win and set records, such as marathon world record holder Paula Radcliffe (02:15:25), Priscah Jeptoo, or the extraordinary human “locomotive" Emil Zátopek (1922 – 2000).

Taller, long limbed athletes with a high centre of gravity and a large stride often have quite a limited action arm action, and run with a tight angle at the elbow.  Take a look at Kenyan Geoffrey Kiprono Mutai.  Shorter athletes, with a lower centre of gravity quite often use their arms in the push-off phase and hold their arms lower down.

To admire what many consider to be the best running action in the world, watch a race with Kenenisa Bekele Beyecha (world record holder for the 5000 and 10,000m). Kenenisa ran his debut marathon in Paris just a few weeks ago, winning in 02:05:03.

Start by standing on the spot, simulate the running action with your arms only, if you like, hold weights of 1-2kg.  Remember to keep an upright position, pelvis slightly forward, shoulders down and relaxed.  Then start walking and slowly bring it up into a run, keeping the focus on your arms.  Even when carrying out other running technique exercises, such as skips, flicks or jumps - the arms should always be used actively and consciously.

If you don’t actively use your arms very much when running, try this exercise. Run short stretches of 80-100m with your arms crossed in front of your chest.  Then run the same stretch using your arms. You’ll feel the difference straight-away.

This error message is only visible to WordPress admins