5 Reasons Why You Must Run Boston 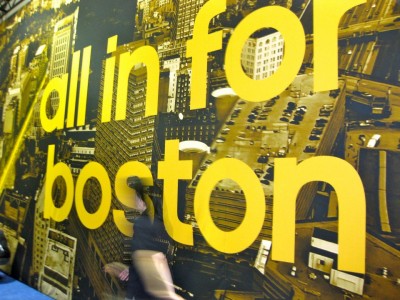 Mention Boston marathon and the terrible events of 2013 are the first things that now come to mind for many people. They shall never be forgotten. However, Boston marathon has long been THE marathon for runners, thanks to its history, challenging course, culture and – of course – the pride of having achieved the Boston Qualifier time.

1. BOSTON IS RUNNING HISTORY
Boston is the oldest annual marathon, 2013 was the 117th edition of the race (compared to 32 editions for London and 42 editions of New York). First run on April 19, 1897, the race is run on Patriots Day, the third Monday in April every year.

2.THE FAMOUS COURSE
The race runs through eight Massachusetts cities and towns: Hopkinton, Ashland, Framingham, Natick, Wellesley, Newton, Brookline, and Boston, famously finishing "right on Hereford Street and left on Boylston Street". The whole experience starts with a long winding queue on Boston Common to climb onto one of what must be hundreds of School Buses (yes, the yellow school buses that you see in American films!) With impeccable organisation and timing, the buses take the runners out to the start line at Hopkinton. Heartbreak Hill
The Boston course is probably most famous for Heartbreak Hill. Not, as many people believe because of the intimidating incline close to the 20 mile point, but because it was the place at which defending champion John A. "Johnny" Kelley overtook Ellison "Tarzan" Brown, giving him a pat on the shoulder as he passed in 1936. Brown rallied and went on to win the race, thereby breaking Kelley’s heart, and the name Heartbreak Hill was born. The whole course is challenging with a long descent at the start and the four Newton hills in the second part of the race.

Another notable and traditional part of the course is the Scream Tunnel at Wellesly College. As you approach the college, a wall of sound hits your ears and the reason for the name becomes all too clear. Wellesly is a private women’s college and tradition states that the College students turn out and cheer on the runners…and cheer and scream and squeal at the top of their lungs they do, offering hugs and kisses to the amateur runners as they pass by…it was a definite highlight of the race for some male friends of mine…

Immense support from the crowd
It is not just the girls of Wellesly College that turn out in support, spectators line the race course from start to finish, yelling support, offering refreshment and encouragement at every step. The race attracts 500,000 spectators each year, making it New England's most widely viewed sporting event.

3. KATHRINE SWITZER: A RUNNING LEGEND - FOUNDER OF THE 261 MOVEMENT

Kathrine Switzer is one of the women who helped to change the face of running and make distance running accessible to everyone, men and women alike.

In 1967, Katherine Switzer was the first women to officially register to run Boston marathon - when women weren't allowed to race for "health reasons". Registered as K.V. Switzer, none of the officials realised that she was a women prior to the start.

On race day Kathrine was spotted by officials around the 6-mile mark, one of whom tried to push her out of the race and remove her race numbers.  The incident took place right in front of the press truck and the resulting photos made headlines across the USA. She carried on regardless and crossed the line in 4 hours 20 minutes.

Katherine went on to complete 39 marathons, winning New York in 1974, and was also instrumental in making the women’s marathon an official event in the Olympics from 1984.  A truly inspirational person who has spent her life working for positive social change, she tells the full story in this video. Her message is that we can do anything we want to do and 261 (her race number on that day) has come to represent a movement helping women to remain “fearless in the face of adversity”. Fortunately, since those early days we have confirmed as totally unfounded the fear that running marathons would cause women to grow moustaches… 4. Patriot, Revolutionary…or Pirate?
The Boston Marathon is held on Patriots’ Day, a holiday in Massachusetts and Maine commemorating the start of the Revolutionary War. A famous Boston Patriot is Paul Revere, a silversmith and early industrialist. He is most famous for alerting the Colonial militia to the approach of British forces before the battles of Lexington and Concord, as dramatized in Henry Wadsworth Longfellow's poem, "Paul Revere's Ride." ( You may even choose to invest in the hat and complete the race dressed as a Patriot…or was that just my friend Alex…?)

Boston is one of the six World Marathon Majors , with Chicago, New York, London, Berlin and Tokyo. One of the attractions of Boston is that you need to qualify for a place, in fact BQ (Boston qualifying time) is the objective of many runners participating in other marathons. Not everyone can make the qualifying time however, and hundreds of runners take part through charity or agency places.

Now, after all that, tell me you don’t want to run Boston…and if you still need to earn that qualifying time, check out our custom training programs.